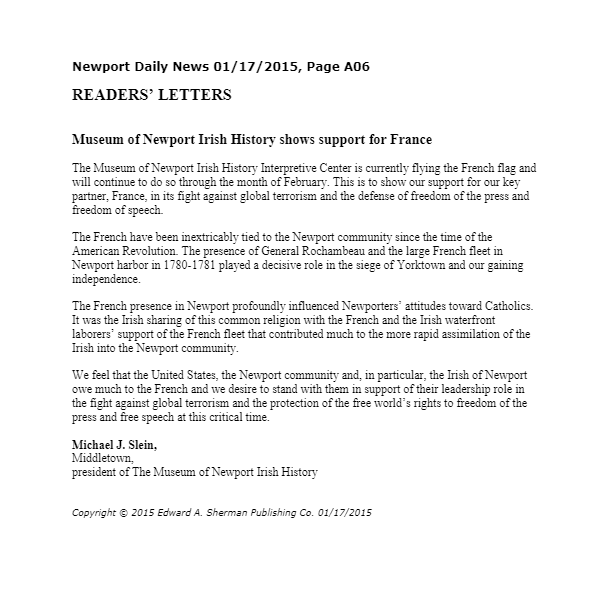 The Museum of Newport Irish History Interpretive Center is currently flying the French flag and will continue to do so through the month of February. This is to show our support for our key partner, France, in its fight against global terrorism and the defense of freedom of the press and freedom of speech.

The French have been inextricably tied to the Newport community since the time of the American Revolution. The presence of General Rochambeau and the large French fleet in Newport harbor in 1780-1781 played a decisive role in the siege of Yorktown and our gaining independence.

The French presence in Newport profoundly influenced Newporters’ attitudes toward Catholics. It was the Irish sharing of this common religion with the French and the Irish waterfront laborers’ support of the French fleet that contributed much to the more rapid assimilation of the Irish into the Newport community.

We feel that the United States, the Newport community and, in particular, the Irish of Newport owe much to the French and we desire to stand with them in support of their leadership role in the fight against global terrorism and the protection of the free world’s rights to freedom of the press and free speech at this critical time.